Most Christians have heard them – amazing stories of how God provides a miracle in dire circumstances or in times of overwhelming need. I’ve always been intrigued by folks who have experienced God showing up in miraculous ways. For many years it never occurred to me that I could be one of those people.  If you would’ve asked me, my response would’ve been, “Of course God is able, and of course He still works miracles for people.”  I knew this in my head, but in my heart I doubted. I’m nobody significant. My faith is rather ordinary; not big and bold, so that rules me out, right?

In one of my favorite books ever, The Hiding Place, Corrie ten Boom tells the story of how she and her sister Betsie endured grueling hardships in a Nazi concentration camp during World War II. Their story is filled with incredible examples of God’s provision before and during their ordeal, but the one that left the biggest impression on me was the story of the vitamin bottle that was smuggled into camp. The brown bottle, although very tiny, produced vitamins drops for dozens of women long after it should’ve been empty. Day after day Corrie was able to procure enough doses to meet the needs of her sister and countless other women. She tried to rationalize what was happening, considering every possibility as to why it kept yielding more doses. Betsie’s answer? “Don’t try too hard to explain it, Corrie.  Just accept it as a surprise from a Father who loves you.” A prisoner assigned to work in the hospital decided to steal fresh vitamins one day, and brought them to Corrie.  Corrie wanted to get the full benefit of the remaining doses in the brown bottle, but that night it was empty. She couldn’t squeeze out another drop.

The story of George Mueller is another tale of a life full of miracles.  Mueller ran an orphanage, and never asked for funds from anyone other than God himself.  During the course of his life he cared for thousands of orphans. Donations often arrived in the nick of time. One well-documented story tells of a time when Mueller and the orphans sat down to breakfast at an empty table.  There was no food and no money to buy any.  Mueller bowed his head and thanked God for the food he would provide.  The staff and children were equally shocked that he would thank God for something that wasn’t there.  As the prayer ended, there was a knock on the door and a baker was there to supply bread for the meal. He had no knowledge of their situation, but said God had told him to bring them bread.  Directly on the heels of the baker was a milk man.  His milk cart had broken down in front of the orphanage and he needed to empty his supply so he could make repairs.  Mueller’s prayer demonstrated enormous faith, and God delivered.

Corrie ten Boom and George Mueller were giants of the faith, and they are some of my biggest heroes.  I only wish I had their level of belief.  But one day it dawned on me that I could also ask God for big favors. He said, “You have not because you ask not.” Right? So what if I put God to the test? His Word assured me that I could.  My faith might not be big enough, but there was no harm in asking.

With all the timidity of a fawn stepping out of the long grasses, I began approaching God with little requests for provision.  I had been praying all my life, but hadn’t considered asking God for help with the small stuff.

It started with mason jars.  I needed about four dozen quart-sized jars.  My search was fruitless. The shelves were empty at every store I checked, and the price stickers under the empty slots reflected a cost for which I wasn’t prepared.  Even if I had found the jars, my budget only allowed for one dozen.  One afternoon I pulled into the parking lot of a thrift store, intending to look for shoes for the boys.  That was the only thing on my mind. Then out of nowhere I had a random thought that became a prayer. “God, you could put some mason jars in that store for me if you wanted to. I’ve never seen canning jars in there before, but it doesn’t mean you couldn’t have some waiting on a shelf somewhere.”

I walked in the store and headed toward the back where the shoes were.  I hadn’t even gone two aisles in when I spotted them. There were FIVE boxes, a dozen each, of quart-sized jars.  The price was a dollar a dozen.  I forgot all about the shoes as I piled those boxes in my cart and went to pay. I was so giddy I babbled the whole story to the checkout guy.  Bless his heart, he looked at me as if I had just stepped off the platform of the crazy train. 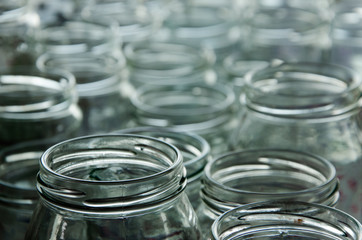 There was the time I begrudgingly gave away my prized 6-inch, full-color flannelgraph set (yes, we used these back in the dark ages) to a missionary.  It was a specialized set that had been a huge sacrifice to buy at $120, and I had used it religiously (see what I did there?) in teaching Sunday school for several years. I wrestled with the decision for days. Knowing the missionary had almost no resources, I packed it in the box and sent it on its way, but I struggled even after the fact.

“God, I don’t have $120 to replace this set, but that’s a small thing for you. Could you maybe get me another flannelgraph sometime?” I kid you not, within a few days I walked into another thrift store and found the same exact set, only it was 12-inch. The price sticker said $5.  The set was brand new, and most of the figures hadn’t even been cut out yet. I was in shock.

Then, a big need came my way.  I was a single mom with nine kids. Our only means of transportation was a fifteen-passenger van.  The transmission went out on that van, and the mechanic quoted a price of $997 to fix it.  He may as well have said $9,000. We were broke and I didn’t know what to do.  The kids and I gathered in a circle on the floor and I prayed that God would provide for us.  The next day a check from a church two states away was in my mailbox.  The amount? One thousand dollars.

I wish I could say that because of these incidents I learned my lesson and that my faith reached phenomenal, Elijah-like proportions. There were times I waited for money to pay a certain bill, we prayed, and the money would come at the last possible moment.  There were other times we prayed, and I doubted. I became impatient, and paid a bill by credit card.  God could’ve come through for us during those times, but I didn’t give him a chance. Like I said, my faith was small.

About five years ago I decided to try asking something different. God had proven that He would provide for one-time needs, but what if I asked him to provide something that was a recurring need?

Forgive me for being crass, but in our house there were a lot of bottoms to wipe. As a new year rolled around I whispered, “God, we need toilet paper.  We need a lot, and we need it all the time.  I’m going to ask you a big favor.  Can you supply our toilet paper for a whole year?” I knew God had a sense of humor and I had high hopes that he would bear with my silly request.

I didn’t breathe a word about my prayer to anyone else…and the toilet paper started rolling in. One of the biggest suppliers was my mom.  She would knock on the door at random times and say, “Hey, this toilet paper was on sale at Kroger so I bought ya’ll a few packs.”

Mom wasn’t the only provider, though.  There were quite a few people that got in on the toilet paper giving.

Someone showed up at church with a huge pack that wouldn’t work for their septic system, and wondered could we use it. Once, I had a blind date that brought me a 36-pack of toilet paper because he thought it would be a cute gag gift! I can’t even remember all the ways we came by toilet paper. It was like this juicy little secret between God and me.  I would sometimes get so happy about the arrival of toilet paper that I would hug the package to my chest, squish it tight and squeal, “You’ve done it again, God.” It was Charmin manna!

I wish I could say that my “experiment” lasted a full year, and that my faith grew in phenomenal ways.  But, as usual, I grew impatient.  After ten months of not buying a single roll of toilet paper and not saying a word to anyone, I finally caved and did both.

Are you disappointed? I was. I felt the sharp sting of regret.  It was David numbering the army of Israel after his success of killing Goliath. God was faithful for ten months, and I have no doubt he would have continued.

The walk of faith is still a struggle for me.  I’ve seen God deliver in incredible ways that I can’t even talk about here. And still…I struggle with doubt.  It’s one of the reasons heaven is so appealing.  I won’t have any doubts once I make it home.

Sometimes it’s hard to ask the really big stuff; the stuff that matters more than transmissions and toilet paper.  It takes a much larger faith to ask God that my kids will love him and know him intimately. There’s much more at stake in a prayer like that. It takes a faith I don’t always have, but I’m begging God to build it deep in my heart.

Lord, I believe.  Help my unbelief.

Have you seen God answer your prayers by miraculous means? What are some ways you would like to see Him grow your faith in the area of answered prayer? I would love to hear from you. Leave a comment here or send me an email at yolanda@yoskiddos.com